My Struggle With the F-Word 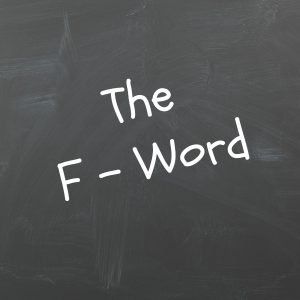 I’ve had an up and down relationship with the F-word for many years now.

And, by f-word I mean FAILURE.

(What did you think I meant?)

That relationship was particularly difficult and rocky the beginning part of December this year.

You see I grew up with a father that expected perfection.

Growing up under the finger of someone that expected you to never screw up was hard. It left a lasting, negative impression. One where anything less than perfection equaled failure. (Note to self: stop expecting perfection from my wife, my daughters, my family, and my friends – it’s not healthy for them or for me – don’t be your father.)

If that is the standard to which you are held; and you know perfection is never achievable, how do you implement and create new business models, new ways of making significant community impact, new intentional missions for greater good? It’s hard. Why? Because, you know there are going to be failures along the way when you are expecting perfection and perfection is unattainable.

What’s the easiest way to prevent failure and not have to shoot for perfection? Do nothing. Stay right where you are and do not try anything. Whether it be consciously or subconsciously, it becomes crippling and debilitating. It holds you back.

That’s where I was the first part of December. Praise the Lord, I can confidently say I am not there anymore. My mindset has shifted and I can thank Darren Hardy, publisher of Success Magazine, for that shift.

You see. Darren is a successful man in the world’s eyes. He has money. He is editor of a major, international magazine. He is an author of several books. He is the creator of many platforms. He gives to the world on many levels through sharing of himself personally and professionally. And, he too once had issues with failure until one day, he too had a mindset shift. Here’s Darren’s failure story:

I first met and fell in love with Failure in the early ’90s, when I got into the real estate business. Back then the market was tough. Really tough. And I was a 20-year-old kid with no experience, no clientele and no credibility while trying to make my mark.

Heck, I wasn’t even old enough to drink. I needed guidance. So when I went to my first seminar, I asked the lecturer to lunch. I wanted to get his best tip for being successful in real estate.

Huh?” was my reply.
He elaborated, “Go fail—a lot—and fast.”

I said, “Hey, man (language of a 20-year-old), I thought the whole idea of success was to avoid failure.”

“Quite the opposite,” he replied.
Then he recited a quote by Tom Watson of IBM: “The key to success is massive failure. Your goal is to out-fail your competition. Whoever can fail the most, the fastest and the biggest, wins.”

I failed a lot and I failed fast.

And since then I’ve had the chance to add failed BIG.

That started my lifelong love affair with Failure.
We are now inseparable.

If, for some reason, we’re apart for too long a stretch, I do whatever I can to rush back into her arms. I am rewarded with expanded success and prosperity.

And I am not the only suitor to Failure.
Seems most people you read about on the cover of SUCCESS love her just as much.

I’ve often asked rooms full of big-time CEOs to list the top five defining moments responsible for their great successes. Inevitably, great failures are on their lists— often occupying more than one spot.

You see, many of the greatest achievers you admire thrive on failure.
They love it!
Because they are obsessed with improvement, they can experience growth only through failure. They want to continually find their boundaries so they can better understand their capabilities and find new ways of breaking through.

Success?
It’s actually not that exhilarating or satisfying to them.
Failure is, for it offers them the greatest opportunity to tweak, iterate and improve. Failure offers them a gateway to the next level, which is absolutely exhilarating, satisfying and thrilling.

Personally and professionally, I am going to be more impactful, more powerful, more insightful, a stronger guardian. Less fearful and less afraid.

It’s starting right now at home and in the community. It’s going to continue each day, each week, and each month as I share life with you. Being vulnerable. Telling the truth. Making an impact.

How did Darren’s story impact you? What is your new outlook on failure? What are you going to improve upon in 2016?

Send me your thoughts and feedback: Hal@RoanokeAdviceGivers.com

Three Tips You Need to Hear Before Starting Your Own Business

With a Prius and Hiking Boots, Meagan Cupka Sets Out to Save Virginia’s Scenic Landscapes

Meagan Cupka didn’t set out to be an environmental warrior. She entered Hollins University looking towards an art major, until an environmental studies course taken to fulfill a general education requirement set her on a new path. Today, she’s the Assistant Director the Blue Ridge Land Conservancy. [People] don’t know who we are and […]

Be Inspired | Do Good Mark Bradford is a Roanoke native who has created a business out of chasing his dreams. While his degree is in respiratory therapy, Mark has always had a deep passion for the arts. Over the years, he’s taught drum lessons and written music; he currently plays bass in a jazz […]